One of the quickest way to lose growth on any Spiritual path is to begin labeling people with words pertaining to material identities. Words such as  addict, psycho, weird, carry all kinds of negative meanings but so do Jew, Christian, Gay, Catholic in the eyes of some people. These days “tested positive” or negative, Asymptomatic and symptomatic are also unhelpful in the time of Corona Virus.

We sometimes need labels to describe certain human behaviours and people often define themselves with certain labels which we may or may not use or try to overcome.

In spiritual life, we are required to love everyone “our neighbour as ourself” to be scriptural about it and that can be hard when a label has been pinned to the person –  raising again the old duality that there is a definitive “Good” and definitive “Evil” somewhere which we need to physically avoid. Thus we become the judge, jury and executor in moral living – having the last word about people we meet. Using our own standards rather than Godly standards to judge.

I recently watched some you tube clips about Humanism  the first was from the Jewish perspective. The clip came from the Secular Humanistic Judaism movement.  In Judaism, people are defined by their Cultural and Genealogical roots  – a material identity they cannot escape from. Although we think of the religion when we hear the word Jewish – that is only because we relate to it from a Christian standpoint, but the Jewish identity is not a religious one.  There are Jewish Humanists, Jewish Catholics, Jewish Atheists, each with their own religious identity, which do not infringe upon their material identity which they are born into which is defined as simply DNA “Jewish”. As a result the Humanist movement in Judaism is not about rejecting people or faith it is simply another way of expressing it´s ideas about God within a community.  Even the speaker in this clip is a Rabbi within the Humanist movement.

In Christianity, we have no such material  identity, we are born effectively into a nameless culture, with or  without religion, we are free to choose faith or neglect it based upon cultural or parental influences. As a result our Humanist movements tend to be a rejection of all things related to religion – we have shows like this one where Humanists fight and argue with Christians because there is no other identity to unite them or to keep them together. Its the all or nothing approach where the best speaker wins. Then in the fringe movements we have “gay catholics”  and Christians who call themselves “Messianic Jews” who want to be linked with Judaism.  Then come the labels which define politicians to help you decide who to vote for in the American Elections. American people actively seek out a label they can relate to, in deciding who shares their values.

With the Jewish approach mentioned above, it was not always like that – until the 19th Century, Jews had to choose to be American or Jewish, British or Jewish etc, something which caused a lot of pain and for others to turn their back on their roots and their label.  Also the embracing of religious terms is a relatively new thing for people – they want some kind of tribal label but not actually the belief that goes with it.  Spanish people are often heard commenting  “I am Catholic but I  don´t practice” because the Catholic Church no longer allows people to “resign” or “leave” officially from the Church – At best you have to simply walk away even if you can´t physically get yourself removed from the register. There is also a certain power in being associated with something however loosely as it brings you closer to a tribal identity.

Humanism in my mind was all about atheism and rejecting Christianity, but in watching the clips above, I discovered that Humanism in both religions is all about celebrating Love. In fact they love to see Love in all its forms, in society and good acts. So what are they rejecting? They are rejecting the personal God , the authority which says “you are a bad person headed for hell if you do not do as I say” and it´s negative language.  So  then, if Humanism recognizes the force of Love – then so do I as a Christian, Christian Scientist, muslim or Jew (whatever label I want to use today).

Lets try to drop whatever label presents itself today – and see the person, defined as Love or a reflection of Love or an affirmation of Love´s presence. If you can´t do that – do an act of Love somehow – to remind yourself that it is there and can be demonstrated by you right now, That is God and God is Love – and in Love we find God. If anyone asks your religion – drop the “ism or “ity” because it is simply Love.

“Love is the window through which we see God – St Augustine”

I recently tried an experiment by sharing the picture below on Social media of me wearing a Jewish Kippah on my head whilst visiting a Synagogue on Doors Open Day last year. I was really interested how the perceived label which people had of me changed and how they reacted. it seems that we do not deal well with perceived change. It was also sad for me that there is still, even today a lot of anti semitism out there. 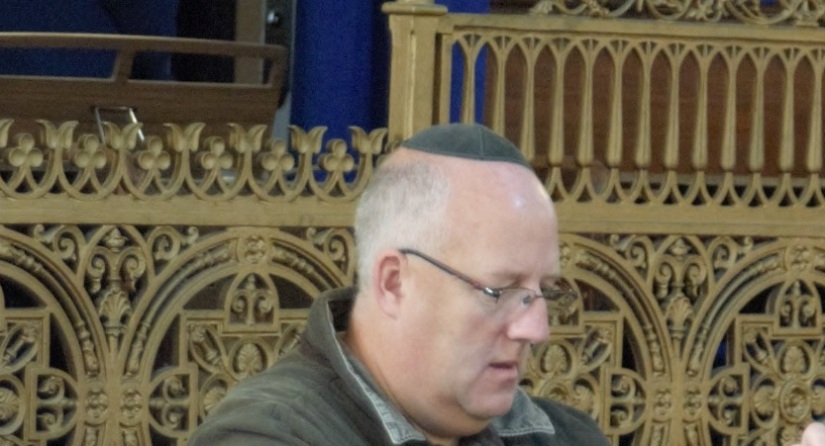